One of the unexpected highlights of my work on the Inner Lives project has been my regular extracurricular jaunts into the East Anglian countryside in search of supernatural, and especially witch-related, landscape legends. However, notwithstanding the density of such sites in Norfolk, Suffolk, Essex, and Cambridgeshire – many of them connected to the 1640s witch-hunt spearheaded by Matthew Hopkins – after nearly two years on the project and around fifty weekend excursions the number of unvisited locations within striking distance of my flat in Norwich was dwindling; I needed to look further afield. Ever since I started working on early modern witchcraft I’d felt the strange pull of Pendle, the borough in East Lancashire where – in one of the most notorious trials in England – eleven people were tried as witches in 1612, ten of whom were found guilty and hanged. Thus, one Friday in late June (just before the heatwave took hold), I found myself on a train to the North West to spend a long weekend in England’s other witch country.

I’d booked accommodation in Barley, a tiny, pretty village in the shadow of Pendle Hill, and predicated my excursion on walking the Pendle witch trail, an eight-mile walking tour of some key locations assembled by the local council (details and a map can be found in this leaflet [pdf]). This is one of several ‘official’ itineraries of enchantment in the area; there’s also a driving route (pdf), a 51-mile Lancashire witches walk extending from nearby Barrowford all the way to Lancaster Castle, and the Pendle sculpture trail (pdf), an extraordinary piece of interactive memorialisation in Aitken Wood that I couldn’t resist exploring at sunset as soon as I arrived (I threaded this previously on the project’s Twitter account). However, the walking trail, looping out from Barley and taking in Upper Ogden Reservoir to the west and Rouglee village to the east in an elongated figure of eight, can claim to cleave closest to the dark heart of the trials and those caught up in them. Slightly delayed by some unforecasted showers, I set out from my comfortable lodgings at the Barley Mow pub late Saturday afternoon and went in search of witches. 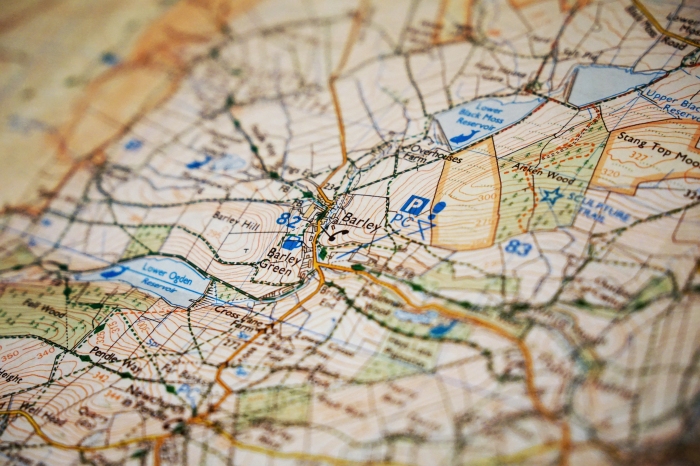 Passing the on-brand Pendle Inn and arcing west, the first part of the trail took me up and over a little hillock and down into the attractive village of Newchurch-in-Pendle. This is home to Witches Galore, a quirky emporium specialising in witch-related paraphernalia, as well as – more historically and malignly – St Mary’s church. Built in 1544, this is where accused witch Anne Whittle (alias Chattox) was said to have plucked teeth from three interred skulls during a funeral; it’s rumoured to be protected by an apotropaic eye set into its tower, while accused witch Alice Nutter is sometimes erroneously claimed to be buried under a memento mori gravestone just to the right of the porch. Its cramped, dark, heavily Victorianised interior is also – without exaggeration – one of the most ominous ecclesiastical environments I can recall entering; it simply oozes menace, with the ticks and groans of a hidden boiler and the ghost-like spectre of a cassock and surplice hanging in the gallery doing nothing to lighten the mood. 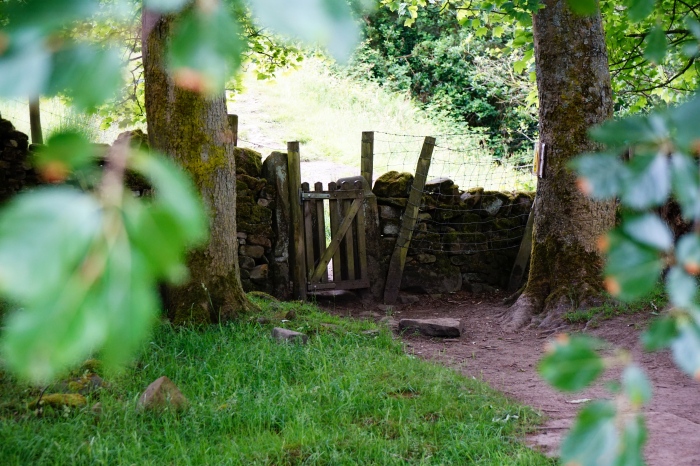 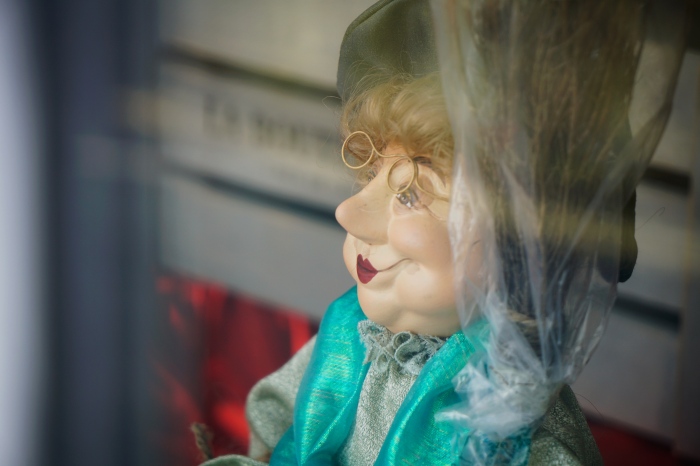 With a sense of relief I left the churchyard and bore right along the foxglove-fringed Well Head Road towards Sabden Fold. Magnificent vistas over the valley to the south afford clear views of Moss End and Bull Hole farms, once inhabited by accused witches John and Jane Bulcock and victim John Nutter; to the right is Faugh’s Quarry, the ‘stonepit in Goulshey’ where Elizabeth Southerns (alias Old Demdike) confessed to meeting the devil in the form of a young boy called Tibb. Now disused, it’s guarded by apotropaic eyes and the ‘wizard of the stone pit’; the origins of this mysterious yet benign effigy are obscure, although some cursory internet sleuthing suggests it’s the likeness of a quarryman who died in the nineteenth century, carved by his colleagues. 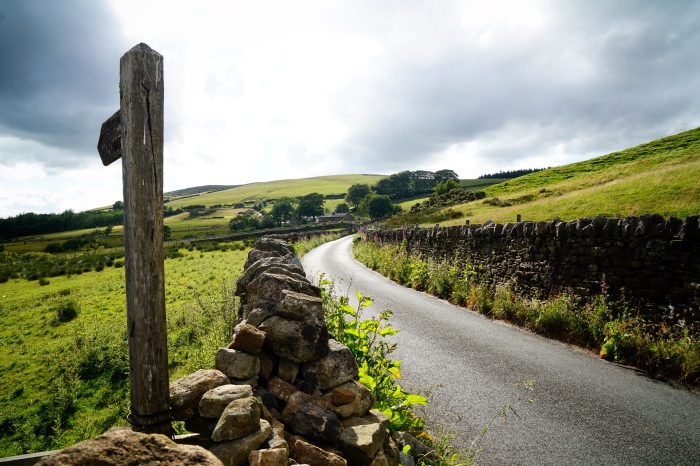 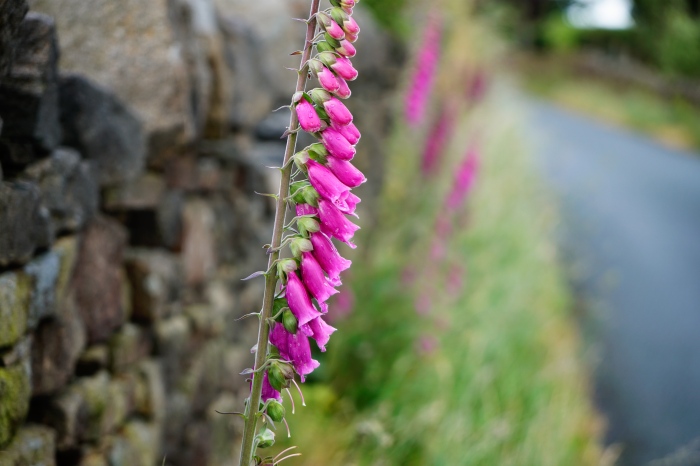 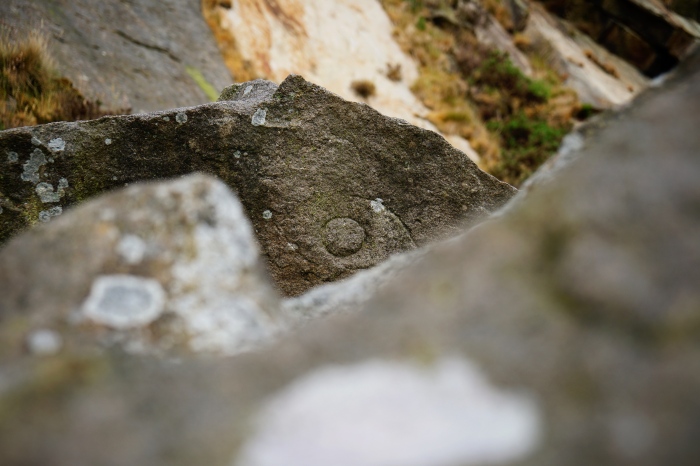 For the final leg of the western loop I turned right at Saddler’s Farm – believed to be the site of Malkin Tower, where a ‘great assembly of the witches’ feasted on roasted mutton – and followed a drystone wall as it rose sharply to the crest of a hill. This part of the trail is much steeper and more demanding than the guide leaflet suggests (I destroyed a pair of New Balance), although at the top you’re rewarded with some fine views of Pendle Hill, a spectacular yet oddly malevolent knuckle of landscape whose sinister presence makes itself felt throughout the trail. With the weather threatening to turn again, and invigilated by some disapproving sheep, I descended towards Lower Ogden Reservoir and picked up the road back towards Barley. A desiccated frog squashed into the tarmac marked a suitable end to the day’s explorations. 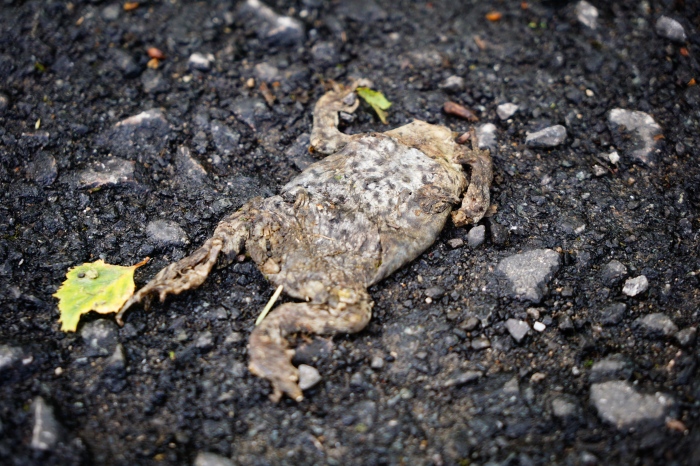 Bright and early the following day I set out on the trail’s eastern loop. The first part of the walk along the Pendle Way is peerlessly picturesque, all stone cottages, wild roses, Welsh poppies, and the soothing babble of a brook. However, the atmosphere changes as the trail deposits you via a series of rickety footbridges into the dark recesses of White Haugh Woods. In this hushed copse there’s a not-unfitting air of death and decay. Tree trunks are snapped and splintered, are missing lengths of bark as if they’ve been skinned, or sprout strange protuberances; several have been recently and violently ripped from the earth, exposing root systems clogged with mud. 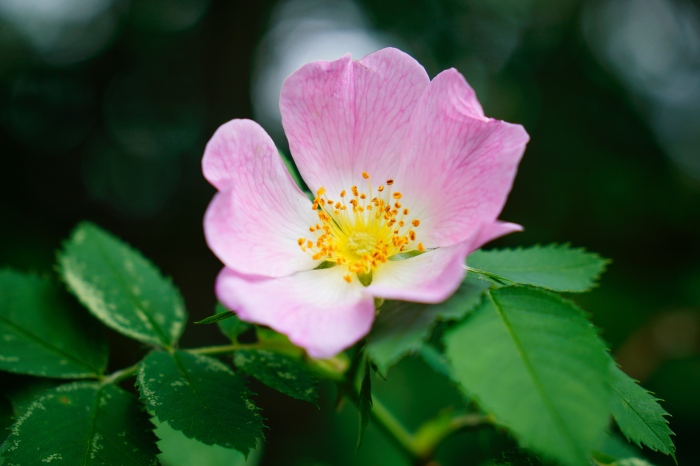 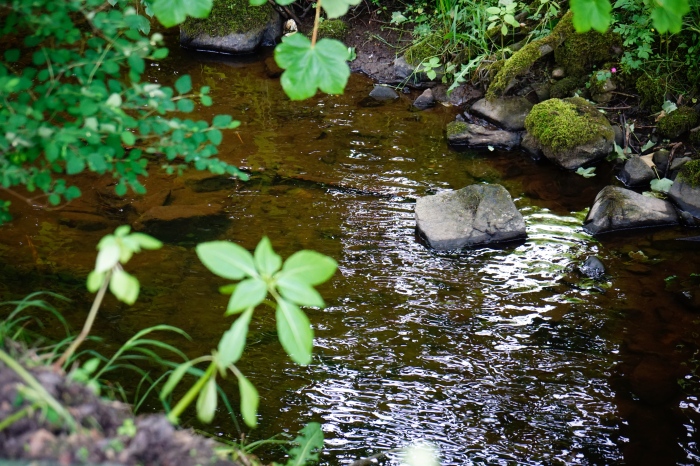 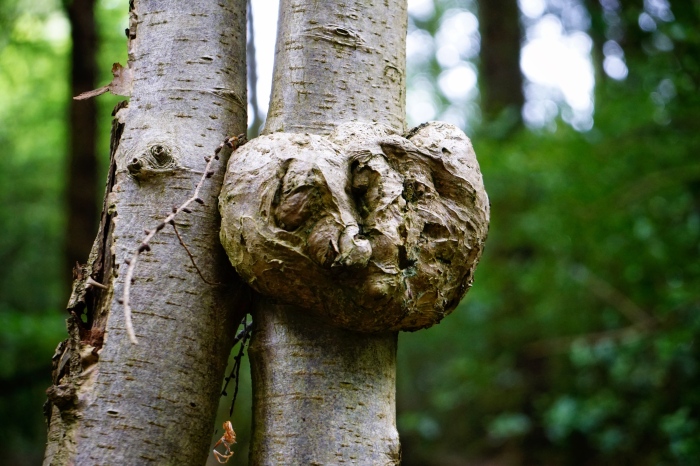 Following the trail out of the forest, I rose to Croft House Farm and turned right towards Roughlee, a genteel descent over stiles and meadows, with only bright yellow signs warning of electrified fences hinting at drama and danger. Arriving in the village, I made straight for the memorial to Alice Nutter, the yeoman’s widow who was one of ten witches who died on Gallows Hill on 20 August 1612. Designed and crafted from steel and brass by local artist David Palmer, the sculpture was unveiled in 2012 on the 400th anniversary of her execution; a simultaneously concentrated yet slightly larger-than-life presence, unashamedly representational, it is beautiful and profoundly moving. I expected this to be the only act of memorialisation I’d witness on the trail, but on the final leg back to Barley I noticed that – literally overnight and as if by magic – an enormous white remembrance poppy had materialised on the southern flank of Pendle Hill. The hillside is often used for such purposes; a massive ‘1612’ commemorating the Pendle witches appeared there six summers ago. 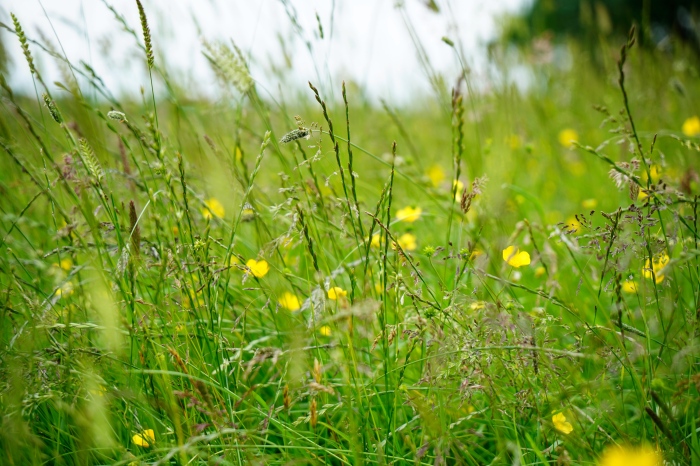 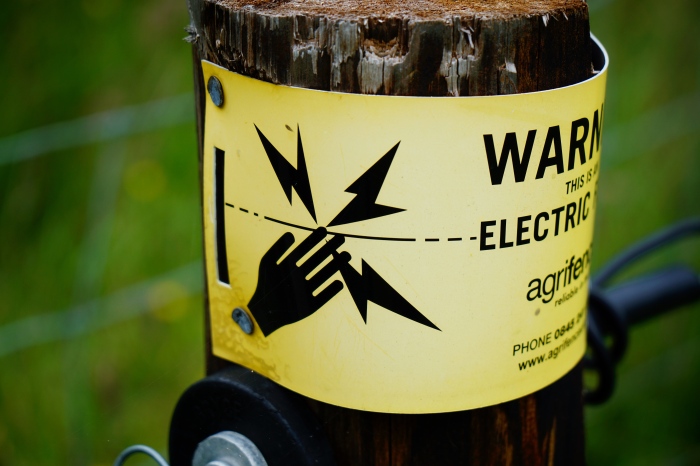 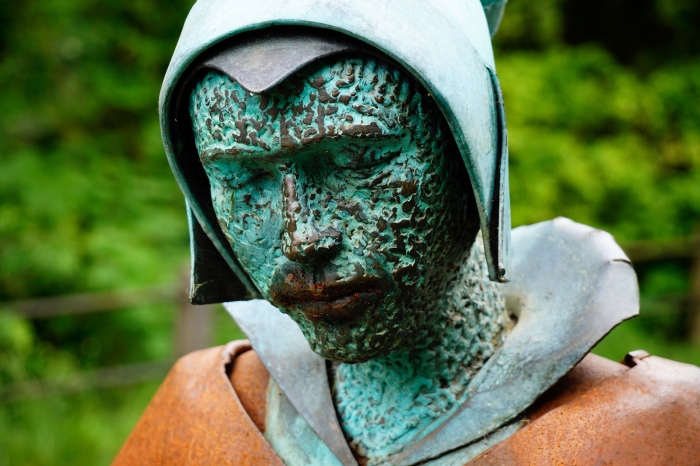 Safely back at the pub, I reflected on my walk. I experienced a welter of feelings as the trail rose, dipped, and snaked where the devil once roamed, and was powerfully minded of the emotional resonances of landscapes and monuments; indeed, long of interest to psychogeographers, the affective qualities of present-day as well as historical environments are increasingly being explored by a wider range of scholarly practitioners, including historians of the emotions. I also thought about ethics. For sure, there’s something faintly exploitative about a branded witch trail, especially in a part of the world where not only walks and pubs but even bus routes proudly work witchcraft into their commercial identities; to a very large extent a community tragedy in the seventeenth-century is a marketing opportunity in the twenty-first, an unsavoury yet probably unavoidable fact of life examined by the academic field of dark tourism studies and the new Netflix documentary series of the same name. However, for all these concerns, and above and beyond its self-evident educational value, I can’t help thinking, maybe naively, that returning to the places where early modern people lived, loved, and died must in some way bring us closer to their experiences and interior worlds, notwithstanding any physical transformations wrought and the cultural chasm that now divides us.

One response to “Walking the Pendle Witch Trail”