Detail of a magic circle for summoning spirits of the air from a medieval manuscript. British Library, London, Sloane 3854, fol. 133v (Public Domain).

Between the 1320s and the 1620s a significant proportion of all accusations of high treason in England involved a magical element. People were accused of casting the horoscope of the monarch in order to discover the date of his or her death, often with the assistance of evil spirits. They were also accused of creating an effigy of the monarch in order to harm him or her (or even defacing an existing effigy), or of using occult knowledge to create poison intended for the monarch (poisoning, before the seventeenth century, was widely regarded as a branch of magic). Accusations of this kind touched some of the highest in the land. Perhaps the most famous accusations of treasonous sorcery in English history were those levelled against Eleanor, Duchess of Gloucester, the wife of King Henry VI’s uncle, in 1441. Equally politically significant was King Richard III’s use of an accusation of treasonous sorcery against Elizabeth Woodville to discredit the validity of her marriage to Edward IV and therefore the legitimacy of her son Edward V; the claim was that Elizabeth bewitched Edward into marriage, meaning that his consent was impaired and the marriage therefore invalid.

The relationship between magic and high treason was an intimate one from the very beginning. The 1351 Statute of Treason made it high treason to ‘compass or imagine’ the death of the king. In Anglo-Norman French ymaginer had the modern sense of ‘imagine’, but it could also mean ‘make an image of’. Making an unauthorised image of the king, including counterfeiting coinage, was considered a form of treason (curiously, this is why the US Secret Service still has the twin responsibilities of protecting the life of the President and catching counterfeiters), and the worst kind of unauthorised image was an effigy created for magical purposes. Whether the parliament of Edward III that framed the statute actually had magical treason in mind is unclear, but the elegance of the statute was that it made it possible to prosecute a magician without any proof that magic worked – all that was needed was evidence that a magician had contemplated the king’s death. Indeed, until 1542 it was only for high treason that a magician could be arraigned in the king’s courts; all other magical offences were tried and punished in the church courts. 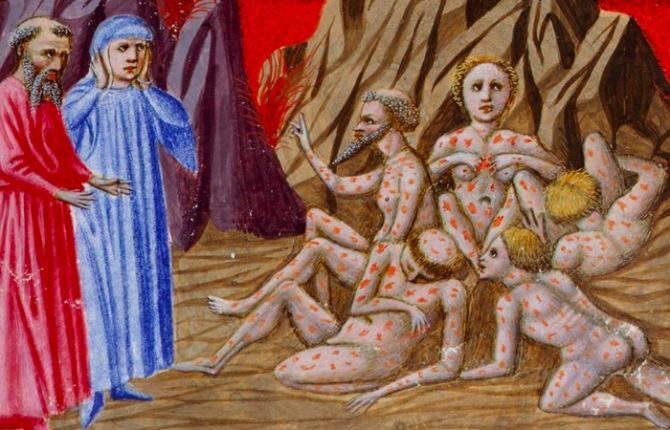 Studying treasonous magic poses particular difficulties. Rarely do we have both sides of the story; almost always, the evidence is from chronicles or documents produced by governments. We do not generally hear the voices of the accused, and because of the nature of the crime, all material evidence (magical books and instruments) was routinely destroyed as part of judicial proceedings. In some cases, it is clear that the accusations were a case of ‘constructive treason’ – trumped up charges, or additional lurid allegations appended to an already groaning dossier of unnatural plots and treasons. Allegations of ‘witchcraft’ made against Anne Boleyn are a case in point. In other cases, genuine occult activities like astrology or prophecy were recast as demon-conjuring in order to secure a conviction, or magical activity that had nothing to do with treason was willfully misinterpreted as treasonous by the courts. But in a good number of cases the evidence suggests that magical plots against English monarchs really did exist. So what motivated people to express political dissent in this way?

A woman caught in the act of melting an effigy of the king in an illustration from A. Cullen, The History of Scotland… Embellished with Elegant Engravings (London, 1815), p. 65. British Library, London (Public Domain).

On one level, the attractions of magical treason are obvious, compared with the difficulty, expense and risk involved in mounting an armed rebellion or even a traditional assassination attempt. Ritual magic could be worked in secret, or at least involving a minimal number of people. For the weak, dispossessed and marginalised it was among the only forms of dissent available. Furthermore, the frequency with which people suffered from serious illnesses in the medieval and early modern periods can only have strengthened belief in the effectiveness of harmful magic. For example, Queen Elizabeth’s councillors were deeply concerned in 1578 that a spell they believed had been cast against her was taking effect because the queen was suffering from an infection to her gums. This may explain why elite conspirators were interested in magical treason as well as the weak and powerless. Magical traitors were often caught not for their magical treasons alone, but because they added a magical plot as ‘insurance’ to a more conventional scheme. Indeed, many magical traitors (such as whoever buried a wax effigy of the young Prince Edward in a London churchyard in 1538) went undiscovered and unpunished.

Magical treason in England was rarely bracketed with witchcraft, in marked contrast to Scotland, where witches were accused of conspiring against the government on several occasions in the sixteenth century. Margery Jourdemayne, who supplied Eleanor, Duchess of Gloucester with love philtres in 1441, was burnt at the stake – but for what crime is unclear. Heresy is one possibility, as there was certainly no death penalty for witches at the time. English witchcraft was first and foremost a crime against the local rather than the national community. Although traditional targets of witchcraft accusations – women and the unlettered – were occasionally suspected of magical treason, the suspects were more often men of status and learning such as friars, priests and members of the nobility and royal family. 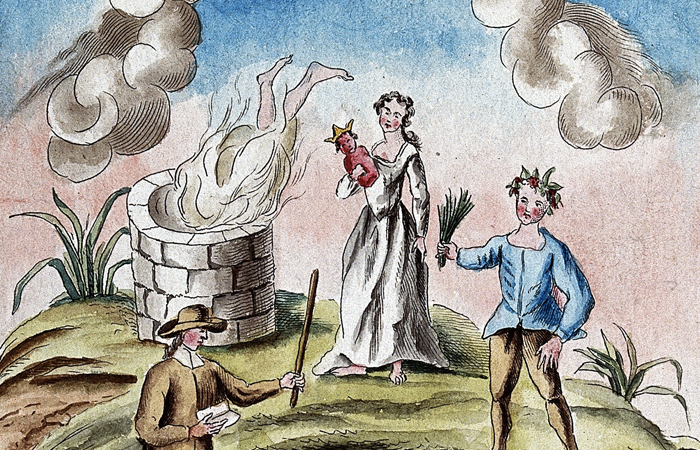 A woman holds a red limbless effigy wearing a crown in this eighteenth-century etching. Wellcome Library, London (CC BY 4.0).

Accusations of magical treason rapidly declined in the reign of James I (although some accused James’s favourite the Duke of Buckingham and his mother Mary Villiers of murdering James by occult poisoning in 1625). One possible explanation for the decline is that magical treason waned with the mystique of the monarchy as the Stuarts became increasingly unpopular. It is also possible, however, that belief in magical treason declined because the last vestiges of the medieval Catholic worldview that supported widespread belief in the effectiveness of ritual magic were disappearing in seventeenth-century England. By the time of the ‘Popish Plot’ scare of 1678–81, a huge treason panic that coincided with an equally extensive treason panic in France, the ‘Affair of the Poisons’, England’s discourse of magical treason had vanished. In France, by contrast, diabolism and abominable rituals were at the heart of the scandal at the court of Louis XIV.

A ‘fake flyer’ calling for magical retaliation against the NRA and Donald Trump, created by artist Nathaniel Russell.

My forthcoming book Magic as a Political Crime in Medieval and Early Modern England explores the phenomenon of magical treason between 1324 and around 1700, but there were occasional recurrences of linking magic with rebellion against the state in later centuries. The most notable recent example in the Western world was reported in February 2017, when contemporary American witches began working spells against Donald Trump. The basic form of these spells, in which an orange candle is dedicated to Trump and then consumed, is essentially the same as the effigy magic for which many suffered a traitor’s death in medieval and early modern England. Old traditions die hard.

Francis’s book Magic as a Political Crime in Medieval and Early Modern England will be published by I.B. Tauris on 29 September 2017. To receive an e-mail alert as soon as it’s available head along to the publisher website!

Francis is a historian and folklorist. He is the author of twelve books, including English Catholics and the Supernatural (2013), A History of Exorcism in Catholic Christianity (2016), and Magic as a Political Crime in Medieval and Early Modern England (2017).