The familiar ‘Sathan’ from John Phillips’s The Examination… of certaine Wytches at Chensforde (London, 1566). EEBO.

In 1566 a sensational pamphlet was published in London that described the crimes of three women accused of witchcraft in Chelmsford, Essex. Elizabeth Francis, Mother Agnes Waterhouse, and Jone Waterhouse all confessed to possessing a familiar spirit whom they identified as ‘Sathan’. This creature, first described as a ‘whyte, spotted Catte’, then a toad, and finally ‘a thynge lyke a blacke dogge with a face like an ape, a short tail, and a peyre of hornes on his head’ was said to ‘require a drop of bloude’ which he sucked from the accused witches. In return for this blood Sathan brought his mistresses riches and revenge. He killed children and made several men impotent. He also forced the accused witches to ‘say [their] pater noster [and all other prayers] in laten’. After performing these acts, the familiar spirit betrayed his mistresses by reporting them to the authorities. [1]

This narrative comes from one of the very first witchcraft pamphlets published in England. For the next 170 years, witchcraft remained a state-sanctioned crime for which between 500 and 1000 people were hanged, with many more formally or informally accused throughout the country. Across the period, popular accounts of witchcraft trials were published in numerous broadsides, ballads, and pamphlets. In my new book, I argue that witchcraft pamphlets in particular hold the key to understanding the central importance of the devil, and the role of emotions, in early modern English witchcraft belief, via the terrifying figure of the familiar spirit.

The role of the devil has long been downplayed in work on early modern English witchcraft, where scholars have traditionally emphasised a preoccupation with non-demonic maleficia (or harmful magic) on the part of accusers that stood in contrast to the concern with diabolism (devil worship and the formal pact with Satan) that characterised Scottish and continental witch-hunts. Yet, I argue in my book, even in England his function was crucial, with fully sixty-three of the sixty-six surviving pamphlet accounts of witchcraft trials highlighting the link between a witch’s pact with the devil and his or her (but, in 90% of cases, her) ability to perform evil magic. Now, when I talk about the devil, I imagine most readers will visualise a rather suave gentleman with cloven feet and hooves, perhaps even with a sharp-looking beard. This image of the devil does appear in English witchcraft texts (perhaps most titillatingly on the frontispiece of Nathaniel Crouch’s 1688 tract The Kingdom of Darkness, which depicts an urbane devil looking rather apathetic while being fellated). However, far more common is the devil’s appearance as a small, tangible, domestic, or common creature known as a familiar spirit.

A suave and disinterested devil in a salacious detail from the frontispiece of Nathaniel Crouch’s The Kingdom of Darkness (London, 1688).

The familiar spirit was unique to England, and is still a common element of pop cultural representations of witchcraft today (think of Hedwig or Cruickshanks from the Harry Potter series, or Salem Saberhagen from Sabrina the Teenage Witch). However, one element of the familiar that has been lost in translation to these modern depictions is its frightening true nature. Although it took on a rather harmless-looking, even charming form, familiar spirits were believed to be the devil or agents of the same. These creatures appeared to witches and attempted to convince them to give their soul to Satan, who they often themselves embodied.

Four familiars appear in this illustration from the anonymous pamphlet The Wonderful Discoverie of the Witchcrafts of Margaret and Phillip Flower (London, 1619). EEBO.

Although familiars generally appeared in the shape of normal, domesticated beasts – such as the ‘whyte, spotted Catte’ that originally attended the Chelmsford witches – others were more exotic. A talking familiar with a head like an ape appeared at the foot of one witch’s bed in 1618. [2] Another, although initially described as a hedgehog, was complicated by the description that it was ‘as soft as a Cat’. [3] Another similar familiar appeared as a hedgehog with a face like an owl. Two more familiars, Grissell and Greedigut, were described as being ‘in the shapes of dogges with great brisles of hogges haire upon their backs’. [4] One mole-like familiar appeared normal until it spoke in a hollow voice. [5] Similarly, cats tormenting a woman appeared rather mundane until they cried out like young children. [6] Others portrayed distinctly devilish characteristics, such as a dog with cloven feet. [7] Perhaps most sensational was the creature who chose to appear as a bear, horse, cow, and even a dragon. [8] 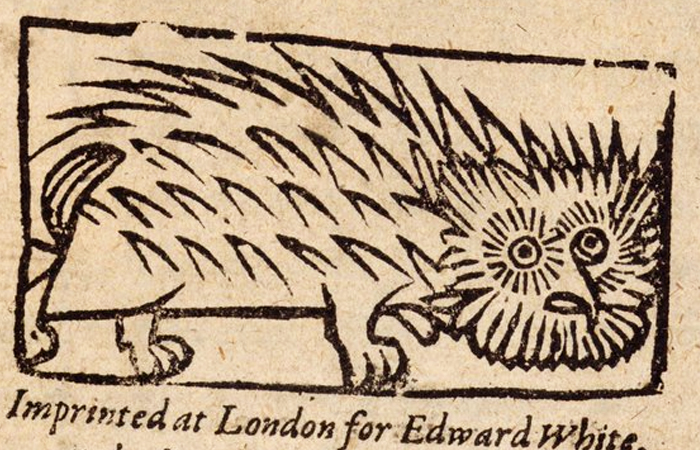 A startling hedgehog owl hybrid from the anonymous pamphlet A Detection of damnable driftes (London, 1579). British Library, London (via @BL_Publishing).

So what was this malevolent menagerie used for? In early modern England, potential witches joined forces with the devil in order to act on their powerful emotions, most notably a desire for revenge, hatred, malice, anger, and fear. Entering into a Satanic pact meant that, in exchange for the witch’s soul and regular doses of blood (which the familiar sucked from teats hidden on the witch’s body), the familiar would do the witch’s bidding, mainly harming people on their behalf, acting out their appetite for revenge, or implementing other malicious desires. However, this was not a purely pragmatic arrangement. Many pamphleteers, accused witches, and witnesses all reported observing or experiencing strong emotional bonds between witches and devils via these animal intermediaries. Some accused witches were even believed to care for their familiars by making them beds out of cotton wool and feeding them milk, as well as the customary blood.

In conclusion, in my book familiars play a crucial analytical role, highlighting both the demonic nature of English witchcraft and the way in which emotions operated as key drivers within witchcraft narratives. We can view the familiar spirit as an emotional conduit, that is to say an entity that allowed the witch to seize power and act on her powerful and uncontrolled emotions. By tracing the types of acts that witches asked their familiars to perform, we can gain insight into the anxieties, fears, angers, and long-standing hatreds that simmered in early modern England’s villages and towns. Moreover, through their strong emotional bond with the witch, they provide another way in to inner lives; they allow us to further understand and indeed to significantly amplify the role of the devil in popular conceptualisations of witchcraft in early modern England, and provide a new lens on the many day-to-day tensions that precipitated and characterised so many accusations.

Charlotte’s book Witchcraft, the Devil, and Emotions in Early Modern England is out now with Routledge. To order your hard or electronic copy – the latter at a bargain reduced price of £25.89 – head along to the publisher website!

Charlotte-Rose is a Postdoctoral Fellow in the Institute for Advanced Studies in the Humanities at the University of Queensland and an Associate Investigator with the ARC Centre of Excellence for the History of Emotions (1100-1800). Her book Witchcraft, The Devil and Emotions in Early Modern England is now out with Routledge​.