I’ve definitely got the bug. I can’t stop looking for apotropaic marks everywhere I go, and it seems that once you start looking you find them all over the place. Here’s a recent round-up of double-Vs – ‘Virgin of Virgins’ – followed by an intriguing archival reference to the magical protection of buildings.

First stop, the bucolic setting of the village Grantchester, not far from Cambridge. This was once home to the poet Rupert Brooke, and the church of St Andrew and St Mary is immortalized in his most famous poem. The chancel is fourteenth century, the nave a little later; its plain pulpit probably came from Corpus Christi College, Cambridge, in the seventeenth century. It was one of a handful of churches in this corner of Cambridgeshire not visited by the ‘iconoclast general’ William Dowsing during the English civil war.

There is a strange elongated VV on the right-hand side of the inner door arch as you enter the porch. Assuming this mark was there in the 1640s, Dowsing might have rubbed it out had he spotted it – as I nearly did: the chalky limestone (or ‘clunch’, as they call it in eastern parts) is soft and moist. 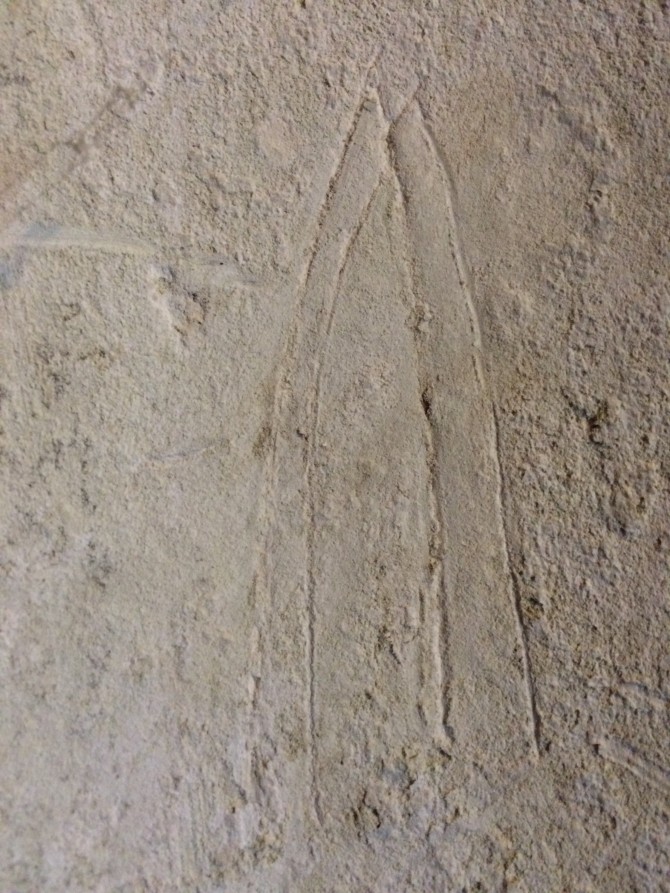 I found another couple of VVs, the first of which was rendered in thicker, squatter lettering – it might just be an ‘M’. Who knows. It’s somewhat hidden away on the lower part of the arch separating the nave from the chancel.

The other, to be found nearby, certainly looks like a double-V, and is unusual in being set in a frame and bearing a seventeenth-century date, clearly 16—perhaps 166? Ultra-violet light, or some other technique used by Matthew Champion (see his work here) in his fantastic church graffiti project, might reveal the rest of the date. 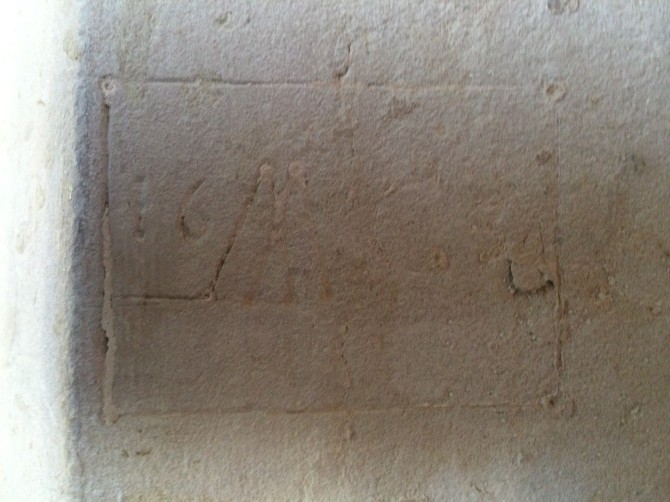 The church at Barton, my home village, three miles from Cambridge and Grantchester’s near neighbour, has the following mark high on the inside left-hand side of the entrance arch. It closely resembles the Grantchester one shown above, apparently being six small holes forming dots, which are then joined up by four lines.

Barton church, which was visited by Dowsing and his puritan iconoclasts in March 1644, has some wonderful wall paintings, too. These include a reassuring image of St Dunstan getting the better of the devil, holding him by the nose with a pair of tongs:

The devil held by the nose at Barton church.

These paintings were probably whitewashed over in the sixteenth century, long before Dowsing came to finish the job. (Dowsing did, incidentally, catch the churchwarden trying to hide the stained glass, which had been removed to stop it being smashed.)

Moving on now from the medieval church to its rival in the era of the Reformation: the alehouse. Formerly The Little Rose, a sixteenth-century inn, and still a pub when I was a student in the 1980s, the building is now the Loch Fyne fish restaurant.

The building is supposed to be haunted by the wife of a former master of Peterhouse, Cambridge’s oldest college, which stands just over the road. I spoke to a waitress, who was curious to know why I was taking photos of the fireplace. She knew nothing of the legend, but claims to have seen a ghost gliding past her in an upstairs room.

It has a nice hearth, with a lovely crossbeam, scrubbed up but still clearly scarred by the ages. There are lots of knife cuts, some of which are clearly VVs, not inverted. 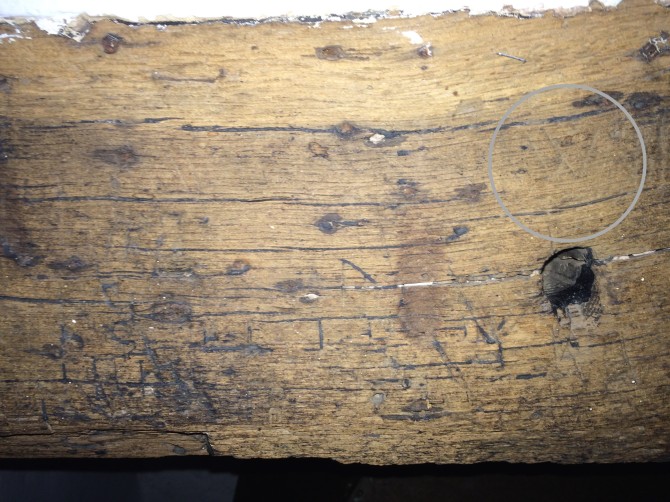 The hearth beam at Loch Fyne, Cambridge, with VV mark.

There are also a couple of boxes-with-crosses, that is saltires invoking St Andrew’s protection, and quite a few burn marks. The burns look like they were done with a hot poker, and may have been put there casually or were deliberate ritual apotropaic marks to protect the alehouse against fire. 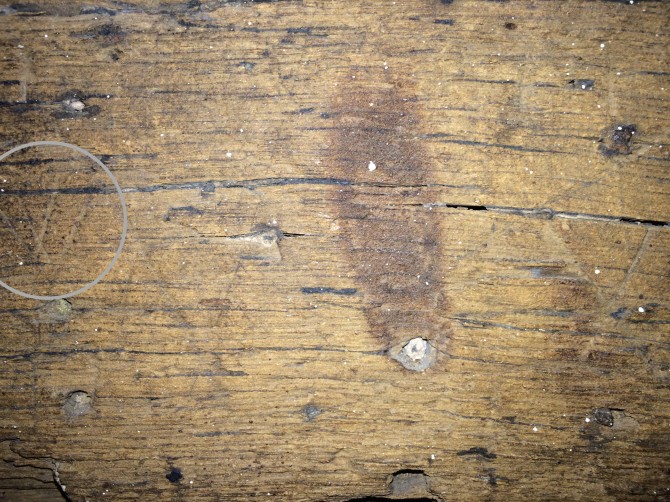 Another VV mark at the Loch Fyne, alongside a possible ritual burn mark.

According to Owen Davies, one of the investigators on the Inner Lives project, we know of no written references to these sorts of marks ever being made. In his Discoverie of Witchcraft from 1584, the great witchcraft sceptic Reginald Scot did mention the custom of positioning written charms around the house, essentially Latin prayers set down on parchment. Chunks of Scot were copied out to make books of charms and spells, including one dating from around 1650 kept in the East Sussex Record Office (FRE 606). On the verso of folio 89, one finds ‘A Charme to drive Spirits that haunteth any house’, which comes from book 12, chapter 18, p. 266, of Scot’s treatise. The instruction is as follows: ‘You must write upon vergin parchment in 3 Corners of your house this same ffollowinge Homnis Spiritus Laudet Dominum b. mosen habent & prophetas exurgat dens dessn pentur inimiei emes’.

Methods of repelling witches from the home, also noted here, include fixing a horseshoe above the door, fumigation with sulphur smoke, and smearing the posts and walls with the blood of a black dog. But then it gets more interesting: Scot and the later copyist suggest a written charm against witchcraft. Apparently,  ‘the triumphant title’ was to be written ‘crossways’  – probably in the shape of a cross, possibly with an italic slant – in every corner of the home. There is no mention of using parchment, which allows one to imagine this charm being written directly on to wooden beams or walls. This, it seems, was the required form of words: ‘Jesus + Nazerenus + Rex Judiorum + memorandum you may joine heare with all the nam[e] of the virgen Mary or of the iiii Evangelest’.

Why no references exist to the making of the more familiar apotropaic marks, especially given how common they seem, remains a mystery. A more basic problem, though, is what they mean. Many of the ‘apotropaic’ marks I’ve found may be nothing of the sort. Some could be the initial letters of someone’s name. Or perhaps they’re just VVs carved by an idle hand with little serious intent to protect a building from evil – meaningless graffiti, or certainly with less meaning than we might imagine. I’ll leave it for others better qualified than me to decide, but meanwhile I’m going to keep looking.